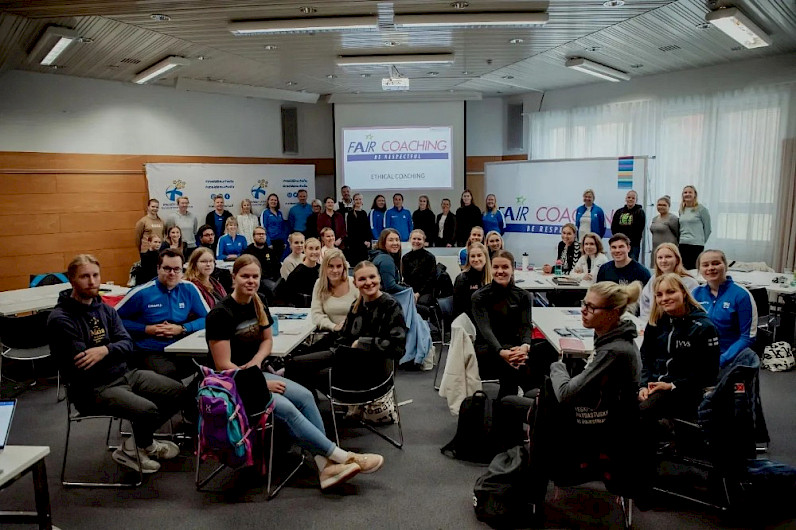 The first session, which was facilitated by Pulmu Puonti (Kisakallio), used drama pedagogy to look into ‘How to deal with inappropriate behaviours from a coaches’ perspective’. The participating young coaches were divided into seven groups and received one of possible three stories to set the scene for the drama exercise. The stories were based on real life examples to provide the young coaches with the reality of what coaches are or can face during coaching. After acting out the stories each group discussed their feelings and thoughts on the story and the session was closed through a whole group discussion lead by Pulmu where each group shared their key aspects on how to deal with inappropriate behaviour, how to spot it, how to intervene and how to make sure that inappropriate behaviour has no place in the sport environment.

The session was followed by the introduction of the You are not alone (Et Ole Yksin), Ilmo and Whistleblower reporting tools on inappropriate behaviour to the participants. Pauliina Lius and Sanna Laurila from the Family Federation of Finland introduced the You are not alone – online course and reporting tool, Timo Huttunen from the Football Association of Finland presented on the Whistleblower tool and Teemu Japisson from FINCIS familiarized the audience with ILMO. Key take-home message was that it is important to notify observations of inappropriate behaviour immediately to the introduced reporting channels. Every channel has the option to report anonymously and the case stays as long as the involved parties wish. It is further important that clubs have a dedicated person who is in charge of communicating internally to all members about these services and how easily they can be accessed.

In the best-case scenario, each club has prevention tools in place in order to not even let inappropriate behaviour to occur, this is best achieved through common club rules, team rules and coaches’ rules.

The event continued after lunch with a panel discussion on: ‘Good coaching of an athlete: Coaches' views on good coaching of an athlete at different stages of the athlete's path’ with Antti Paananen (Finnish Olympic Committee), Sirkka Kaipio (Finnish Figure Skating Association), Pekko Söderström (Finnish Football Association/Urhea) and Mervi Brandenburg (HIFK). The panellists were grilled by the Young Coaches Team on:

The best thing in coaching:

And many other hot topics. Here again the key message was that through an open mind, a sound coaching philosophy, being brave, observation, networking, communication and exchange with other coaches each young coach has the potential to develop into an effective expert coach who takes their participants needs into consideration at every step of the way.

The panel discussion was followed by a short Our Sport workshop led by Sari Tuunainen, whose outcome emphasized the key message of Fair Coaching, being a positive and supportive coach, being athlete-centred, creating a safe training environment, communication with athletes and the parents, having an open ear, continuous professional development as a coach and providing developmental feedback to the athletes.

The second to last session was led by Satu Kaski on: The daily life of a coach and managing one’s own work. Coaches are faced with plenty of stressors during their work, these stressors are due work-load, expectations of the employer and the resources available to coach, which might be unsatisfactory to the work the coach is expected to accomplish. Skills a coach needs to have in order to deal appropriately with the situations they are facing are: time management, recognizing their own resources, self-management, planning, problem-solving, self-regulation, self-care and well-being skills and information collection and being in the present. Satu closed the session off with a whole room discussion on what a coach can do to improve their working situation. This included to clarify one’s core work objectives, whether the assigned working time is enough to accomplish the work objectives, how the assigned work is split up into planned and acute work, whether the coaches’ work is satisfactory and whether it is interesting and challenging, and once this is done to have an open communication with the employer to improve work assignments and agree upon expectations which can be accomplished.

But the event didn’t end there just yet, but after this information loaded day the participants had the chance to test their problem solving skills in a game at an escape room followed by a joint dinner.